I’m a Property Company Director – What is a SIC Code and a Confirmation Statement?

Many landlords now use a property company to either invest in property directly, or as a management company for their own personally-owned portfolio. Being a Company Director can mean a new world of strange acronyms and new things to learn about … this article looks at what a company ‘SIC’ code is, and also what a company ‘Confirmation Statement’ is – and why these are important aspects of companies that Directors need to have an understanding of.

What is a SIC code?

The SIC code is the ’Standard Industrial Classification’, and defines what a company’s activity is. A company must have at least one SIC code, but may have up to four, if required.

The SIC code is displayed at the bottom left of the main page on Companies House for every company: 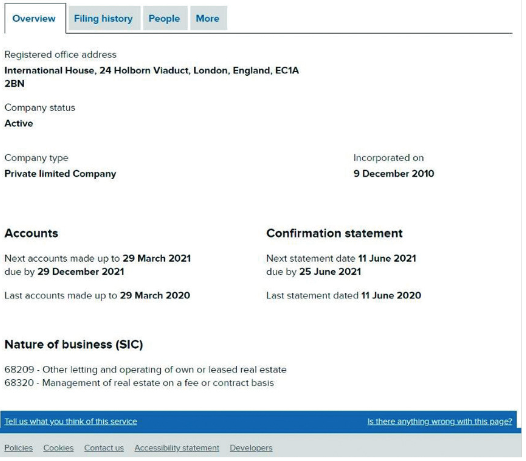 When do I tell Companies House my company’s SIC code?

What SIC codes will lenders accept?

…. as part of the company mortgage underwriting process, underwriters will normally check the Companies House website to check that the borrowing company’s SIC code is one their accepted codes (which in most cases is the above codes).

The other commonly-used SIC code is:

… which is the SIC code for property development (i.e. Buy to Sell, rather than Buy To Let). As lenders are expecting company borrowers requesting BTL mortgage finance to let their properties – rather than develop and sell them – then usually using this 68100 SIC code will cause a red flag with the lender.

It’s important to ensure during a company mortgage application that the SIC code has been checked as being correct, as we have seen many occasions when a last-minute check at Companies House by the lender has resulted in a delayed release of funds as the SIC code is not acceptable to the lender.

Is there a special SIC code for a ‘Special Purpose Vehicle’ company?

It’s important to appreciate that most company BTL lenders want to lend only to a ‘Special Purpose Vehicle’ company (often known as an SPV). An SPV is just a general name for an entity (usually a company, but could be an LLP, or some other type of entity) that does one thing i.e. has a ‘special purpose’.

Generally, company BTL lenders don’t want to lend to companies that do things other than rent and manage property. So, most company BTL lenders won’t lend to a trading company for example, such as a contracting company (which would typically have a SIC code such as 62020 – Information technology consultancy activities).

What does the SIC code mean for tax purposes?

Can I change the SIC code?

After the company’s formation, the SIC code can be changed via a simple online update. When the company was formed, an ‘Authentication Code’ is provided, which is a passcode allowing the Director to amend the company’s details on the Companies House, system, including changing the SIC code.

What is a Confirmation Statement?

A Confirmation Statement is an annual online submission to Companies House, to confirm a company’s basic details, such as:

Changes to a company’s director(s), Registered Office address, year-end, and some other changes, can be made at any time during the year, and a mid-year Confirmation Statement isn’t required.

However although the Companies House requirement is just for any changes to be confirmed via the Confirmation Statement annually, many lenders like to see changes updated via a mid-year Confirmation Statement filing. Although this isn’t required as such by Companies House, as with many lender requests sometimes it’s easier to comply rather than argue!

When does a Confirmation Statement need to be filed?

One more thing… the PROOF scheme

Instead, companies registered on the PROOF scheme can only submit changes, accounts and Confirmation Statements using the company’s online ‘Authentication Code’, as a security measure. This means that the Authentication Code is a sensitive piece of information (like a debit card PIN number) and should only be shared with the company’s directors and professional advisers (accountant & solicitor).

Using the PROOF scheme is free, and given the benefits in terms of information security plus the convenience of online filings rather than hard-copy filings, it’s unusual for a company NOT to use the PROOF scheme – assuming the company is aware of it!

Many landlords now use a property company to either invest in property directly, or as a management company for their own personally-owned portfolio. Being a Company Director can mean needing to learn about how companies work, both in terms of general filings and legal responsibilities, and in terms of taxation and finances.

Having the correct SIC code recorded at Companies House is usually essential for companies wanting to access company BTL mortgage finance, as lenders routinely check the Companies House system to ensure an ‘acceptable’ SIC code is recorded. However ultimately this is a simple piece of admin to record, amend and confirm annually via the Confirmation Statement process.

So, although aspects of operating a company, such as selecting a SIC code, filing a Confirmation Statement & registering for the PROOF scheme, may seem initially bewildering, these are simple admin tasks which can be easily dealt with by the company’s accountant, as part of the overall service package.